The It’s Academic Team is in the Semi-Finals 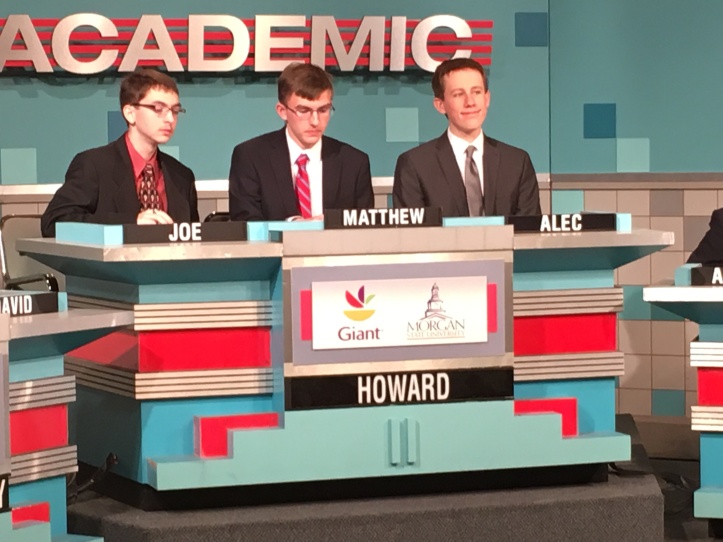 As the It’s Academic Team prepares for the semifinals round this week, I sat down with team captain Matthew Kirby to chat about the season and what lies ahead:

Novak: So tell me about your season so far.

Kirby: We have had a fairly successful season, having won our first two televised games and making it to the semifinals of the It’s Academic competition. In addition, the It’s Academic club has competed in a variety of other competitions on Saturdays, typically in a format known as quiz bowl, where we have had moderate success. The quiz bowl competitions are held all over, often requiring us to get up at or before the times we normally would for a school day, and feature questions regarding more challenging subject matter than the average It’s Academic game.

Novak: Who else is on the team?

Kirby: Our current team composition is myself (Matthew Kirby), Joe Fusco, and Alec West, but there are a lot of other members of our club who I feel like should have recognition, such as Rachel Walter, Chris Jung, Philip McAdoo, Matthew Bae, Rohan Shah, Grace Kanja, Jeff Brown, Vaughn Samuels, and others.

Novak: The questions on the show can be pretty challenging. How do you prepare?

Kirby: We have practices twice a week for two hours after school where we play with questions transcribed from previous games (most of which come from the nineties), or with packets for quiz bowl competitions. In addition, I had previously practiced on my own time during the summer on a website featuring quiz bowl questions.

Novak: How did you become interested in this club?

Kirby: Funnily enough, I was not initially interested in joining It’s Academic. I had several friends who were involved, but only after frequent prodding by an upperclassmen friend last year did I finally decide to join the club in December of my Junior year. At first I was more so daunted than anything; the seniors last year were particularly good at answering questions quickly. But after I attended a history bowl competition held at Centennial I decided to work to get myself involved more.

Novak: What’s the next step for the team?

Come support the team at their taping this coming Saturday. See Coach Bloedorn or Coach Gilbert for more details!